“Bukid” is “Farm” in Filipino. Sylvatica and the love for forests have come to The Philippines and taken me with it. The Philippines shares so many similarities and parallels with Costa Rica and Jamaica, but it also has so much that is unique about it. The climate is basically the same as Costa Rica and Jamaica. Many of the same agroforestry staples grow in all three of these countries, such as bananas, plantains, pineapples, okra, sweet potato, pumpkin, avocado, mammey sapote, coconut, guava, cashew, jackfruit, mango, cocoa, star apple, noni, madre de cacao, and water apple. It has been so interesting and such a blessing to have the opportunity to spend most of my recent life in these three countries. With so many similarities in climatic and vegetative qualities, I have become increasingly perceptive to cultural and ethnic qualities that make each of these places so unique.

Costa Rica, which is the origin of Finca Sylvatica, is a place that thousands of permaculturists call home. It has the ecological awareness and regulations in place to keep the environment relatively protected, resilient, and adaptive to climate change. For decades it has been extensively exposed to the tourism industry, and in particular, the ecotourism industry. As a result, much of the population in Costa Rica has become very international.

In Jamaica, the population is almost completely composed of descended West African slaves. Much of them are now subsistence farmers that rely on a limited selection of exotic agricultural products that have been naturalized and distributed domestically (Swabey, 1939, 1942, McDonald et al, 2003; Headley and Thompson, 1986). There is only one active permaculture center on the island that I know of, called The Source Farm, which holds only one or two Permaculture Design Courses per year. Thanks to many of you, I officially won the 2019 Peace Corps Jamaica Cover Photo Contest, which means that it will be featured as Peace Corps Jamaica’s official Facebook cover photo.

The Philippines has by far the lowest gross national income of the three (General Assembly Resolution, 2016), yet in my experience has by far the richest and most generous and friendly culture of them all. I must admit that I am biased since I am half-Filipino. Like Jamaica, Permaculture is not well known yet, but the principals are already in practice. The Philippines is also located very close to Australia, where there is an abundance of permaculture courses.

Currently, all three of these places feel like home to me. Even though they are all so far apart, they all share the qualities that happen to be most important for my Peace Corps Masters International research at The School of Environmental and Forest Sciences at The University of Washington (UW). The qualitative half of my research methods, titled “Farmer Perspectives in Jamaica,” have now been approved by the UW’s Human Subjects Division, which means that I can now officially begin conducting at least 36 ethnographic interviews with local Jamaican farmers. In a nutshell, my methods are based in naturalism, immersion, understanding, and discovery. It is a semi-structured, long-term, narrative, literary, non-fiction oral history that relies heavily on participant observation. So far, I have completed 8, all of whom have been very receptive and allowing of audio recording. I can already see that these interactions will be very valuable to my overall research, which is likely to revolve around a technique that I learned about in permaculture, called “chop and drop.” The definition of this technique that I give to Jamaican farmers is: “a sustainable farming and forest management practice in which the branches and leaves of plants are cut and left to decompose directly on the ground.” Usually the definition requires follow-up to describe how contrary it is to “slash and burn,” but in my mind, it goes much further beyond, in that it is a form of pruning that maximizes and improves the economic, social, and environmental impact of ecosystem management. If any of my readers have discovered this technique in the scientific literature, please let me know. The closest thing that I have found to it is the term “coppicing,” which doesn’t seem to capture the element of time to me as well as I would like it to. Regardless, my overall research will look at coppicing over the long term, specifically at my Peace Corps site here in St. Mary, Jamaica. The quantitative side of my research is just getting off the ground as well. So far, it just involves taking measurements of various trees before and after pruning to monitor regrowth. Perhaps down the road, it could expand to observe all the products and services that come from the process.

For many of you, the last paragraph that you read could have been the most boring one you have ever read in your entire life. The lack of audience interest is more common than I anticipated for thesis writing. To congratulate everyone who made it this far, I will let you in on one of the most amazing and mind-blowing secrets I have ever discovered in the agroforestry world, and that is the makapuno. Check out this mini-documentary I made while in The Philippines last month:

The permaculture principle “creatively adapt and respond to change” was well utilized by Bridget and me when we realized that the pests damaging these rice paddies we were standing in were even more delicious than the rice itself at the Cabiokid Permaculture Center in The Philippines.

Monkeys in The Philippines are also considered pests. There were about 10-20 of them gathered around a filthy smartphone on the side of the road while we were bird watching. We considered taking the phone for several minutes until abandoning the idea. It was not worth having them attack us, bite us, steal our food, phones, poop in our car, give us rabies, or any of the myriad reasons that people avoid them. I couldn’t help but consider how Bill Mollison said, “the problem is the solution,” and that “you don’t have a slug problem, you have a duck deficiency.” In our case, we didn’t have a monkey problem, we had a Philippine Eagle (also known as ‘monkey-eating eagle’) deficiency.

This is a bamboo bicycle frame that was made at the Cabiokid Permaculture Foundation in Nueva Ecija, The Philippines.

At Cabiokid, they soak their fresh cut bamboo in their rice paddies to prevent decay. 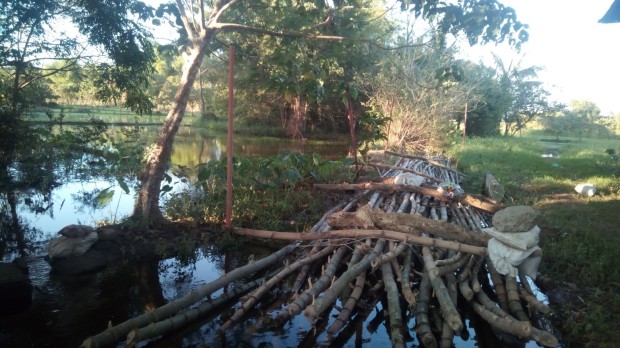 You don’t have a snail problem, you have food abundance.

This is one of the most efficient and low maintenance vertical gardens that I have seen. It utilizes a small strip of sunlight and roof rainwater to provide resources for a wide variety and abundance of plants. I really admire Ate Inday’s ingenuity in utilizing this niche to create something that is both beautiful as well as productive.

Here is another idea that I discovered here in The Philippines. Repurpose 2-liter plastic bottles for drip irrigation devices. Just cut off the bottom of the bottle and attach it to a bamboo stake. Loosen the cap so that the water comes out in a slow trickle to irrigate plants. It works especially well for recently planted trees, such as the cocoa tree below.